Idempotence means duplicates don’t matter. It means you can safely retry an operation with no issues. The classic example is the elevator button: you press it twice and it does not call two elevators. We explore why we would want that property in an email server. 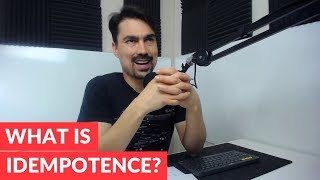 Eric Normand: What is idempotence? Why does it help so much with programming in distributed systems? By the end of this episode, you will know how to implement idempotence in your own system.

Hi, my name is Eric Normand, and I help people thrive with functional programming. Idempotence is important because it captures the essence of the safe retry. Without safe retries, you really cannot implement safe distributed protocols.

We know that that doesn’t have an effect. We still want to do it for some reason. It’s a just-in-case. Maybe they’re right, maybe the signal didn’t get to the elevator. It’s worth trying because it can’t hurt anything. That’s the kind of thing that we want to instill in our distributed systems. Technically, it is an algebraic property.

When you’re talking about pressing a button, this is an active effect you’re having on the world. Whereas in algebra, it’s a property of pure functions, mathematical functions. It means, if you capitalize the letters of a string twice, it doesn’t matter. The first time is enough. Technically, if you apply F to a value, let’s say F(x), it’s the same as applying F to applying F(x).

Sometimes, you know if it didn’t get there. You get some connection-broken message, but sometimes you just don’t hear back. It timed out.

Did it get there and the acknowledgement timed out, or did it never get there? Did the other system crash? Did it crash before it sent my email or after it sent my email? You don’t know. It crashed, it’s too late. Email is actually a good example because you don’t want to send the same email twice.

Let’s say you have an email server and you send it a message saying, “Please send this email to my customer.” You don’t hear back. You just don’t hear an answer. What do you do? What happened? Do you send it again?

What if it did already send the email? Is it going to send the same email a second time? If it didn’t send it and I don’t send the message again, then the customer won’t get the email.

This is really a real business problem. Idempotence would solve that. If I could send the same message again, and it won’t break anything, it won’t have a second effect. Just like that elevator button, I could send this message all day. I could send it a hundred times, and the email would only get sent once. That’s a good thing.

What it lets you do is decouple. It’s decoupling the number of effects that happen with the number of times that you request that effect. I can request it a hundred times, but it will only get sent once. That is something that you really want to have. You want to be able to retry safely with limited information.

I don’t know if this went through, but I’m going to try again. That is a very nice property to have in your system.

The server that’s receiving it has to remember all of the IDs of the emails it has ever sent. That is for total complete idempotence. Usually, that’s not practical. You can’t remember every ID because it could be in the millions. They could date back for many years. It is unlikely that you’re going to get a request that takes years to arrive.

In a practical case, you might have a window that says, “Well, we keep three days of IDs.” That means that you can resend the same ID within those three days, and we won’t send it a second time. You have to find some practical limit that balances the memory requirements and the retries that you’re doing in your system.

Notice, it’s very important, this concept of identity is very important. If you don’t have a concept of identity, what does it mean to send the same message again? If I want to send two emails to this person, I need to be able to send two emails to them. I need some way of saying that they’re different. If I want to retry, I want some way to say that this one is the same as that one.

You need some identity on your requests. If you’re looking at an elevator button, there’s probably an identity, deep in the electronics of this elevator service. It knows what button I pressed. It’s third-floor-up, or fourth-floor-down. There’s some identifier for that button, which allows it to light up, first of all, and stay lit until it needs to be turned off.

That identifier is probably used in multiple places. It puts in a request, “Oh, we need an up-elevator on the third floor because we know that button and what it means.” It’s also used to say, “Hey, I’m already sending that third floor elevator. I don’t need to do that again.” It’s using that identifier.

If you have a set of numbers, you give each email a unique number. As the email server sends off emails, it remembers the number in a set, and just adds it to that set. If you add the set, add it twice, you’ve got idempotence already.

To determine whether you want to send it, it’s pretty simple. Before you add the thing to the set, the ID, you ask the set, “Do you contain this ID?” If it does, then you’re done. If it doesn’t, you send the email and then you put the ID in the set. There are other data structures that are idempotent. If you have hash maps, those are idempotent.

If you add the same key and value twice, then it has no extra effect. Another thing that you could consider idempotent is something like adding zero to a number. If you need some kind of idempotent addition, you can do that.

There are other data structures that have idempotence in them. They’re more complicated and they’re specialized usage. I’m not going to go into them.

Imagine they’re like sets with other properties. You can add things in, but maybe they don’t grow as fast as a set would grow. They’re like more probabilistic, the kinds of data structures.

I mentioned strings being uppercased. That’s something that’s idempotent as an operation. You could use that if you need to write, like uppercase name means something different from regular case name.

We need it in distributed systems so that we can have safe retries. It lets us decouple what gets done from how many times we request that it’s done. You can easily implement it using idempotent data structures and operations. It requires a sense, a notion of identity in the messages.

I like to be in deep discussions with smart people. Please email me. I’m eric@lispcast.com or get in a discussion on Twitter. I try to use Twitter as a discussion medium. I’m @ericnormand with a D there.

Also, you can find me on LinkedIn. I’m trying to get better at LinkedIn. It’s a little hard for me. If that’s where you like to connect, let’s connect and start having a conversation.

All right. See you later.