Function composition is taking the return value of one function and passing it as an argument to another function. It’s common enough that functional programmers have turned it into its own operation. In this episode, we go deep into why it’s important and how you can use it and write it yourself. 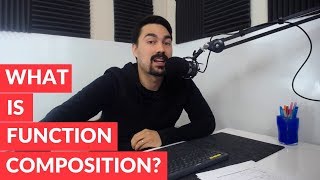 What is function composition?

This is an important topic because it’s something we do all the time. We do function composition in both functional and non-functional styles of programming.

Functional programmers and mathematicians have named it, they’ve named it functional composition, and they’ve turned it into a higher order function. It’s something that we tend to talk about probably more than you would in a non-functional language.

There’s a special case where you take that return value of g and you pass it as the first and only argument to f.

Now, the g is the…You don’t even need to name that return value, you don’t need to save it into a variable. You pass it directly to f.

If you take this special case — because it’s so regular — you can turn it into a higher-order function. That is, a function that takes f and g and returns a new function that does that same thing, that does the f open paren g.

Mathematicians usually use the dot as the operator for a function composition when they want to talk about it in a paper or something. They’ll write, “f.g,” to mean f composed with g. This gets confusing, and it’s one of the reasons why function composition is thought of as difficult.

The reason it is that way is, like I said, it’s like doing f open paren g, open paren, put the args of g, and then close the parens. They’re in the same order as if you were to call it directly, but for clarity, you might want to move the g out of there, because it’s inside out.

The arguments get evaluated first before the function gets called on those arguments. If you move the g above there, and you called it g result equals g, and then you called it with its arguments, and then after that, you did f open paren g result…

I’m trying to talk through code, but the idea is that it’s in the same order as something you should be familiar with. It’s just when you look at it on it’s own and that’s not explained to you, it looks backwards.

Why do we talk about this? Why do we want to turn this into a higher-order function?

First of all, it’s very common to do this. It’s common to call a function and pass that argument to the next one. Even though it’s less common than the general case, the special case of the single argument is still really common.

Let’s say you wanted to double a number and then square it. You could double it, so you call the double function, then you take the result of that and you pass it to the square function, which then returns the value.

You could say, “This is a function composition,” and you can call compose with the two functions. That gives you a new function, which is the double square.

You’re taking this idea that normally you’re just doing code by embedding the call to g as an argument to f. You’re now turning it into an object, a function, called compose, that can do that. Now, this thing can be manipulated like any other function, like any other value.

This compose function is not just a bit of syntax that your language understands. It’s a function that your code can understand, that your program can use. Then you can pass it to other higher-order functions like map, and other stuff. You’re getting leverage by turning it into a first-class thing.

There’s all sorts of examples that I could write by hand each time, or I could call compose, and not have to name the arguments, not have to repeat that boilerplate.

This point-free style is a way of building functions without naming arguments. To be very frank, arguments take up a lot of brain space, if you have to name the argument, you have to think of a good name, otherwise, it’s going to be worse than not having one, and they take up code space.

You don’t want to be naming them if you don’t have to if it’s not going to add to the clarity.

There’s this thing called point-free style. Function composition is used a lot in it because you don’t have to name the arguments.

Another cool thing about function composition is that it is associative and it has an identity. There’s a whole episode on what an identity is. Notice if I do f composed with the identity function…

It’s associative, which I have a whole episode on that. Real quick, it means the grouping doesn’t matter.

When you have something that’s associative, and it has an identity, that means it is a monoid. I have an episode planned on monoids and what makes them cool.

That’s just a cool thing I wanted to mention at the end. If you don’t understand it, just wait for that episode and it will come.

This is the kind of thing that happens when you start dealing with functions as first-class objects, especially higher-order functions. You can start to get these kinds of cool algebraic properties that come out.

I just know when I’ve talked about this in the past, the really common question is, “Why do I need this? Why do you need it?” The truth is you don’t need it. You can do manual function composition each time.

You can, but then the other question is, “Why do you need anything?” You can always just do for-loops and gotos if you want if your language has gotos these days.

If you can use a map, it’s probably less code than a for-loop. That’s not really what matters. What matters is that it’s less error-prone. The cool thing is that once you have map, map is a function. Map is something that can now participate in all these other higher-order functions.

Same with compose. You could do it manually, but then you don’t have a function called compose that you can use in other ways.

This is part of, I would call it, the leverage of functional programming. Just by turning this thing that you do a lot into a function that can now participate in the rest of the ecosystem, you now have this leverage.

For now, you’re acting in this higher level. Now, you’re composing compose. You’re mapping compose over things, which you couldn’t do before. You could do it, but you’d have to write out compose each time you wanted to.

Let me recap. Function composition is simply when you take the return value of one function and pass it as the argument to the next function. You can imagine making a function that just does that. You’ll realize that you do that over and over, that there’s a common pattern.

You could just make a function that takes the two functions and returns that common pattern function. That one is called function composition. It’s the special case.

Mathematicians use a dot. Even in Haskell, probably other languages, they use a full stop or the period character to indicate function composition, just because it looks like a dot. Because it’s so easy to do, it’s just a dot, you do it a lot.

It reduces boilerplate and then it reifies this concept into something that now you can leverage in with the rest of your functions. It’s used a lot in point-free style and it’s a monoid. It has an identity and it is associative.

At the end, I’d like to give you, I think of it like homework or something that would help you use this knowledge that I’ve just talked about. I think that it would be a good learning experience to write your own implementation of function composition. It’s not hard. Like I said, it’s just f, open paren g in JavaScript.

You can look it up if you have to. If your language has first-class functions, it is really like a three-line function. It is nothing big. You don’t have to do the full-blown, industrial-strength one that can handle multiple arguments and things like that.

That was a favor for you. Go ahead, do that for yourself. Learn a little bit deeper than what you can in a podcast.

You probably have coworkers who would like to know a little bit more about this functional programming stuff. If you subscribe, then you will get the next episode, which also has good stuff that you’ll probably like if you liked this one, because that’s how it is. I will have more stuff coming.

Thank you very much, and see you next time.