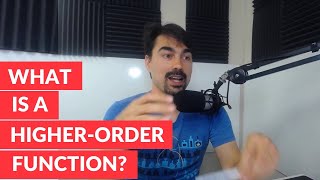 What is a higher-order function?

Let’s get to it. First, the definition. A higher-order function is a function that either takes a function as an argument, returns a function as its return value, or both. We tend to use this all the time. If you’re a JavaScript programmer, if you’ve ever done any JavaScript, you’ve probably used them all over the place.

Then, Reduce takes a function, an initial value, and an array, and runs the function on the initial value and each of the elements in the array, iteratively, and then returns the value at the end. These are all functions that take a function as an argument. We’ll call them first-order functions.

Where does the term come from? I don’t know if there’s a real origin, if this is the actual origin, but the way I like to think of it is there’s the notion of the order of a polynomial. A polynomial in math is some equation that’s like, 4x^2+3x+2. You could have, 7x^3+4x^2+3x+2.

Why would we do this? Well, if you look at the examples of Map, Filter, and Reduce, they are basically specific use cases of for loops or recursion, perhaps, if that’s how you want to implement them, that are very useful and repeated a lot.

You could write the recursion yourself, or the for loop yourself, that transforms all the elements in a list and returns that new list with the new elements. You could do that, and every time you’d write the same for loop or the same recursion over and over again.

What Map does is it lets you not repeat that for loop and talk about what’s different, and that’s nice. It’s way less error-prone to have the thing be…The looping is done for you. All you have to do is provide this function, and the function turns out to be the body of the for loop.

It loops through all the things. At the end, you’ll have a list of all the things in the original list that are greater than 10. What Filter lets you do is abstract that away.

You say, “I do not need to care about the for loop anymore, there’s a lot of errors that I could do in the for loop. Right now, I’m just going to pass the greater than 10 in as a function,” and Filter will take care of the rest. Reduce is similar. This lets us build new abstractions that help us reduce that repeated code.

Map, Filter, and Reduce are pretty universal. You’ll find them in a lot of languages, in the standard libraries. Because if you’ve got a general purpose language, these are general purpose tools, they work very well, like in any domain.

You could have some in your domain that wouldn’t make sense to be put in a general purpose languages, standard library. You can find them and you can write them yourselves. That’s why we had to learn higher-order functions.

Now, this function that always returns three is very easy to write. You can say function return three, and you’ve got that. As a little construct, it might be faster to say constantly three than to write out a whole function. Depends on how verbose your language is.

It’s a new function, but it’s calling “notIsEven,” so that’s odd. Now, of course, this is easy to write on your own. You can easily do that. When you build up a collection of these little combinators, is what they’re called, little functions that return or transform functions, return new functions, you can compose them.

You can do a thing that composes constantly with a not, with whatever you want, do it three times. There’s all sorts of things you could do to transform this thing so that you’re operating at this higher level. Instead of writing out the code, you’re doing higher-order transformations and stuff.

You don’t want to get too abstract. Sometimes it’s better to just write it out, but it’s possible. When you get to the next level of thinking, that’s where these things actually start to become very useful. I do want to say, I sometimes see this as related to what, in the object-oriented world, people call, dependency injection.

Instead of referring to the objects in the global space or constructing them themselves, they allow them to be passed in.

Let me recap the definition of higher-order functions. These are functions that either takes a function as an argument, returns a function, or both. That’s possible, too. We use them all the time in JavaScript. So many functions have callbacks. Every time we’re passing a callback to another function, that function is higher-order.

You need first class functions for this to work. You need to be able to pass functions as arguments and return them as return values. Some common ones that you might know — Map, Filter, and Reduce. I call these the three functional tools. They’re your basic tool set for doing functional data transformation.

Try to write a conditional, like a function called, “If.” I know you probably can’t call it “If,” you can call it, “myIf,” that takes a Boolean and two functions, one for the then and one for the else. Give it a shot, see if you can do it.

You can also return a function. That is something that does come in handy, but we’re not going to go too deep into that. I think it’s related to dependency injection.

Do give that a shot. I’ll give you a little assignment. Try to write a conditional function that takes a Boolean and two other functions and decides which function to run based on that Boolean’s value.

All right. My name is Eric Normand. This has been my thoughts on functional programming. You can find this episode and all other episodes at lispcast.com/podcast.

You will find video recordings, audio, and text transcripts of everything there. You’ll also find links to subscribe and how to follow me on social media, how to get in touch with me. Awesome. I appreciate you being here, and rock on.