I prefer Clojure to Haskell. It’s probably mostly due to accidents of history: getting in Lisp at an earlier age, spending more time with Lisp, and only having one Haskell job. But I do have some philosophical differences with the Haskell philosophy as it relates to Haskell as an engineering tool. In this episode, I go over four of them, and try to relate them with anecdotes. 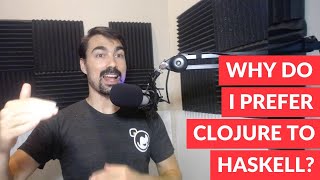 Why do I prefer Clojure to Haskell?