Is there some reason a business would choose Clojure over other languages? Let’s find out! 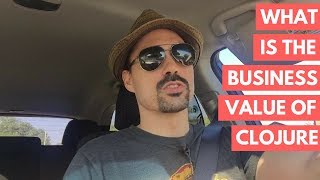 What is the business value of Clojure?

Is there some reason a business would choose Clojure over other languages? Let’s find out! https://share.transistor.fm/s/3f2d3c97 https://www.youtube.com/watch?v=fczFKrP7_mI Transcript Eric Normand: What is the business value of Clojure? Hello, my name is Eric Normand. These are my thoughts on funct

Eric Normand: What is the business value of Clojure? Hello, my name is Eric Normand. These are my thoughts on functional programming.

I was watching a talk by David Nolen the other day. David Nolen is the maintainer of ClojureScript. He’s done quite a lot in the Clojure community.

I’ve been wrestling with that because I’ve been trying to figure out what the business value of Clojure is. I thought that maybe it has to do with the reduction of risk because Clojure lets you quickly experiment, quickly develop solutions so you can quickly evaluate whether a solution is going to work for you. You’re mitigating the risk that way because you have such a small investment.

I’ve been taking to his idea more and more because I want to explore that more deeply. When you choose a programming language unless it is something super specialized that gives you a huge advantage in the area you’re in. If you choose Ruby and Rails for your architecture because you’re doing quick one-off Web apps, that might give you enough advantage to warrant you choosing that just for the business value.

What he was saying was in the long term what matters is the processes, thinking, the architecture of your system, and how well you program it. I have to agree with that.

Does that leave any room for Clojure?

Language choice is a hiring decision

If language choice is a hiring decision, why wouldn’t you just go with Java, JavaScript, or Ruby? Some of the most popular languages out there. Then you’d have more hiring options.

If choice of programming language is a hiring decision, why wouldn't you just go with Java, JavaScript, or Ruby? Some of the most popular languages out there. Then you'd have more hiring options. Why choose Clojure?

When you choose a more obscure language like Clojure, you're choosing your hiring pool. The advantage of Clojure is that you will be hiring Clojurists and tapping into that community. Clojurists are different from Javaists on average.

To me, it makes a lot of sense. Clojurists are different from Javaists on average. That’s all you can do when you’re looking at programmers as an aggregate. You have to average them out.

If you want to play it as a numbers game like, “I’m going to use Java in my company because I can always find Java programmers,” you’d have to imagine the programmer you’re going to get. There are a lot of Java programmers. Just by the fact that Java is taught at a lot of universities, it might be that programmer’s only real language, only language that they’ve worked in before.

You have to think that is going to affect the quality of the candidate. A candidate who knows several languages, has been part of different communities, and understands things from different angles is going to be a better programmer.

Typically, that’s what you get with a more obscure language like Clojure. This used to be the case for a language like Python. People used to talk about how Python was a good language to hire for.

I do want to talk a little bit about what are the benefits of learning Clojure for the job applicant. David Nolen mentioned this, that on the programmer’s side, the real reason to choose one language over another is developer happiness. There’s also job pool. That’s an important consideration.

A final reason to choose one language over another is to buy into a community. You're choosing your peers. Companies should choose the language to pick who they hire, a programmer should pick a language based on who they want to work with.

Developer happiness is also a real factor. If you’re happy in one language and not another, you should take that into serious consideration when choosing a language. It could make a real difference.

I believe that Clojure is the language that has the best support for REPL driven development, for interactive programming, for live programming.

These are all different ways of saying the same thing. In Clojure, you will write code and you can see whether it works immediately. This is something that you get in most fields of making, of invention.

You are doing some woodworking, you pick up a tool, and you start carving your block of wood. You can see is this tool going to get me where I want to go. You can tell pretty quickly that you’re on the right path.

You can then get into a nice flow because you are confident that you’re moving in the right direction. You can get into a rhythm of working.

One thing that happens a lot in programming is we have to write a lot of code before we see anything happen. Then we have to go back and figure out why it didn't work. If that cycle is too long, it's stressful.

That’s fast feedback. I think that can help developer happiness.

Out of your way

The other thing is the amount of BS work that you have to do. What I mean by that is a lot of languages have you create abstractions just for abstractions sake.

The abstractions don’t help you with what you’re trying to achieve. I’m going to call out some languages like Java — where it might not be the language itself — but the community, certainly, is very much into abstractions that don’t help so-called design patterns and things like that. It’s not that the design patterns themselves are wrong. They’re overused and over-valued for what they give you.

By going with Clojure, you’re choosing a language that makes lean abstractions, just the right kinds of abstractions, and amount of abstractions easy. That’s what you’re buying into for developer happiness. Just getting rid of all the boilerplate and bureaucracy of the language.

That’s the developer happiness side.

Then there’s also this other side of buying into a community. You’re choosing your peers. Because companies should choose the language to pick who they hire, a programmer should pick a language based on who they want to work with, who they want to communicate with, what conferences they want to attend. That’s the community aspect.

If you want to learn what Clojure people talk about, if you want to be involved in that community, and be around people who are thinking about the things that Clojure programmers think about — you can tell what that is by the conference talks, the blog posts, the podcast, what people are working on, what they’re talking about. That’s another reason to choose the language.

There you have it. You’ve got both sides. You’ve got the hiring side and you’ve got the being hired side. Why choose any particular language? I just happened to use Clojure as the example there.

All right. My name is Eric Normand. Please subscribe if you enjoyed this. Please tell your friends. Share it, like it. I appreciate you being here. Thank you so much.