Data orientation allows freedom of movement between layers of meaning. Each interpretation adds a layer of meaning. If the data were hidden, we would not be able to freely interpret it how we want. In this episode, we explore an example of what it means to move up and down the layers of meaning. 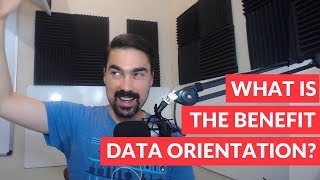 What is the benefit of data orientation?

Data orientation allows freedom of movement between layers of meaning. Each interpretation adds a layer of meaning. If the data were hidden, we would not be able to freely interpret it how we want. In this episode, we explore an example of what it means to move up and down the layers of meaning. htt

By the end of this episode, I think you should have a really good idea of why data orientation is useful as a programming paradigm, programming style process. I don’t know what it is. My name is Eric Normand, and I help people thrive with functional programming.

Data orientation — just a quick recap — means programming with data. I’m going to amend it a little bit, and I am going to say at all levels.

I’m going to cut to the chase. The benefit is freedom. It’s freedom to work at the level you want to work at, the level of meaning.

What do I mean by level of meaning? Let’s imagine we have some JSON. It’s a map. It’s got some string keys and some string values. Some of the values are maps as well. There’s arrays in there with some numbers. It’s a JSON.

At a lower level, this is just characters. We took some characters, and we parsed them into JSON.

JSON is really like a syntax for how you represent maps, arrays, and strings, etc. It’s a syntax. It’s really characters one level down. Characters, if you go down another level, are a sequence of bytes.

We’re back at JSON. If we interpret again, we go up another level. We look into the JSON. We see it has information that makes it pretty clear that this is an HTTP request.

It has a URI. It has a server, host. It’s got a request method, stuff like that. It’s an HTTP request.

The way you usually do when you interpret an HTTP request, one thing you can do is you can route. You can look at the path and figure out like, “What is this HTTP request supposed to do?”

Now, if we look, if we interpret it again, we’re going up another level of meaning. We’re going to see that you look in the body, and it’s a set password. This is trying to change the password of this user. Let’s stop there.

We got all these levels. I’m going to count them. One, two, three, four, five, six. We’ve got over six layers of meaning here.

This is the benefit of data orientation that you can move freely. You have the freedom to move up and down the layers.

Even if I’m at the highest level we got to, which is, “This is a request to set the user’s password,” I could still take that and go back down to bytes. I could take it and serialize it over the network. This is a freedom that we have.

If you were hiding the data, you wouldn’t have that freedom. You don’t know how to go. You’d have to invent in the whole API to move along these levels, these layers of meaning. This is the benefit — the freedom of moving up and down. This is going to be a quick episode.

If you say, “I’ve got this update user settings request,” now let me treat it again like an HTTP request and get this header out of it. Or let me treat it, again, like JSON and I’m going to just get the keys from it, which is something you can do with JSON, with a map. You can get the keys.

Then some didn’t have a change of type. When we went from JSON to HTTP request, it was still JSON. We didn’t put in a new type. It’s the same type.

We didn’t change it. Now, we’re going to get to the details of this in the next episode, but just note that.

Let’s recap. We had six levels of meaning there, and we were able to move up and down between them. At any point, we can treat it like JSON and serialize it to a string.

Then take that string, send it over the network. It’s going to get turned into bytes, into packets. There’s another kind of interpretation you’ve got there.

If you like this episode, you should subscribe. You should go to lispcast.com/podcast. You will find links to subscribe, also to get in touch with me on social media. You’ll also find all of the past episodes, including audio, video, and text transcripts of all of them.

This has been my thought on functional programming. I’m Eric Normand. Thanks for listening and rock on.