My book is coming out soon in early access. It’s called ‘Taming Complex Software: A Friendly Guide to Functional Thinking’. But what is ‘functional thinking’? In this episode, I explain the term and why I’m no longer redefining ‘functional programming’. 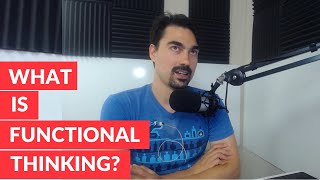 What is functional thinking?

My book is coming out soon in early access. It's called 'Taming Complex Software: A Friendly Guide to Functional Thinking'. But what is 'functional thinking'? In this episode, I explain the term and why I'm no longer redefining 'functional programming'. https://share.transistor.fm/s/bbb4b302 https:/

Eric Normand: What is functional thinking? In this episode, I’ll talk about the topic of my new book. My name is Eric Normand. I help people thrive with functional programming.

I have a new book, which will come out, eventually. I’m publishing it with Manning. It’s about functional programming.

The title of the book is, “Taming Complex Software — A Friendly Guide to Functional Thinking.” I wanted to talk about what functional thinking is, what I mean by it. I started this podcast about 18 months ago. It was made to start thinking about this book, and the ideas that I wanted to put into it.

There’s a lot of truth to that definition, but I feel it makes a lot of assumptions that are not explained in the definition. It is also problematic for other reasons. It scares people. Because when they learn what side effects are, how can you write software if you’re avoiding the main purpose of running our software in the first place?

I wanted a definition that would clarify it, and put this definition as a smaller part of a bigger picture. As an example, the definition makes a distinction between pure functions and side effects, but it’s not explained in the definition. I feel this distinction that’s being made is very central to functional programming. It should be part of the definition.

I’ve been in a lot of discussions. Some people say, “It’s so clarifying to hear you make that distinction as the primary thing.” Anyway, I was continuing along with this idea when the publisher finally came up with a title that everyone at the company, the publishing company that’s working on the book liked, which I read before, Taming Complex Software — A Friendly Guide to Functional Thinking.

The functional thinking got me thinking that maybe I don’t need to be so antagonistic about this definition. I’ll just call it something else. Call it what I’m explaining something else. The thing is no functional programmer would say that distinction between side effects and pure functions is unimportant.

In a certain sense, you could say, it’s good to pick fights, because it creates marketing, a buzz about your book. It’s like a little controversy that gets people talking about the book, and so then they might buy it.

What I have been thinking about more and more is that it’s not the discussion that I would have with people would be among people who are already bought in to functional programming. It might be good for marketing. I decided I didn’t want to do it. I liked the functional thinking idea that it’s not really that different. It’s just that it hasn’t been defined.

A lot of what people understand when you say the term functional programming. They’re already like, “So, it’s about monads?” I’m like, “No, that’s not where we’re going. We’re going much more fundamental.” It’s about this distinction between pure functions and side effects. That’s an update. That’s what functional thinking is.

When you see the title, you’ll know where I’m coming from with that. The main distinction that functional programmers do make that distinguishes them from other programmers and other paradigms is identifying side effects, identifying pure functions, and identifying the other implied thing, which is the data.

The definition does not say anything about data. It just says pure functions. I’ve asked people about that, and they say, “Oh, well, it’s implied because you need to add something for the functions to act on.” That’s obviously data. It’s there. No one would disagree that you need data as separate from pure functions.

They just never mentioned it in the definition. Functional thinking explicitly calls it out. I’m calling them actions, calculations, and data. Actions, they’re not the same as side effects. They’re more like impure function.

Look for the book. It should be coming really soon, the next few weeks. We’re counting it in weeks, now. We had to pull all the little pieces together. Then, someone at Manning has press to a button so it goes live. It’s happening.

They don’t like to promise this, but the idea that they’re shooting for is one chapter every month, a new chapter released every month, or, at least, a major update to an existing chapter. I’m starting with three chapters, chapters one through three. Then I hope to hit that target of one chapter a month. I’ve been working at that pace. It looks good.

I’m going to sign off now. You can find this episode and all of the past episodes and all future episodes in the future at lispcast.com/podcast. You’ll find video recordings, audio recordings, and transcripts. You can read it if you prefer reading.

You’ll also find links to subscribe, or contact me on social media. If you want to follow me there, get in touch with me. I much prefer a discussion than simple follow. It’s all there. Go to lispcast.com/podcast to check it out.

All right. I’m Eric Normand. Keep on programming functionally, and rock on.