Dan Friedman’s The Little Typer is coming out in September. I’m very excited about this book. It’s about dependent types, and it claims to “demonstrate the most beautiful aspects”. I can’t wait! 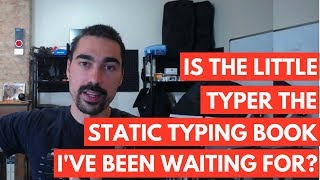 Is The Little Typer the static typing book I’ve been waiting for?

These are all little books. It’s a style of book that Dan Friedman writes. He always uses different co-authors. They’re just teaching functional programming stuff and is very cool style. I have a book. I’m not going to bring it out. I have two of them, but it’s like question and answer.

In The Little Schemer, it’s just scheme, very basic operations on lists and things like that. The other one I have is The Little Prover which is all about proofs. It’s very cool. This new book is coming out. It looks like it’s coming out in September, so almost here, and it’s all about dependent types.

One of the things I’ve been waiting for in typed languages is basically a structure and interpretation of computer programs. About static typing. SICP, that’s an abbreviation for “Structure and Interpretation of Computer Programs,” is a classic book teaching how Lisp works, how to implement a Lisp using an interpreter, a compiler.

It’s basically computer science through the eyes of Lisp. What’s cool is it uses Scheme which one of the authors co-developed. Scheme is a really small concise language. It’s perfect for this kind of thing. There’s not a lot of fluff to get in the way. It’s easy to implement Scheme. Because it’s so simple, it was used as a language for exploring language features.

In SICP, in the book, he started exploring, what if we add call by name instead of call by value, things like that, just messing with how things got evaluated and you get to explore how things work. Everything was so small and concise. You really got this sense of understanding the fundamentals without a lot of fluff around it.

Haskell is bigger compared to Scheme

I know from Dan Friedman’s other work, from The Little Schemer, from The Little Prover, the two that I’ve read, that it really is trying to get at the essence. It’s trying to find that core of what it means to be Scheme, which is basically doing a lot of consing and traversing cons cells, and recursively.

The book is going to have some core

What does it mean to do proofs? Theorem proving about your code. There’s a very small language in that comes with it that you can start to reason about code with. I’m optimistic that this book is actually going to have some core.

This is what dependent types are, and this is why they’re cool before you have to go and learn Idris, which I think is a very powerful language. It’s also a maximal language in the way that Haskell is.

What can we do with types once we have them? I want to see what’s the minimum what is that, and I’m just really looking forward to this book. It’s got a nice pedigree. I’ve been looking at the author, the co-author, David Thrane Christensen, very interesting. It’s got an afterword by Conor McBride, who is a type theorist.

I’m just really looking forward to it. I’m going to get it as soon as it comes out. I hope I don’t go into a cocoon while I’m reading it. It’s that kind of book because I still have other work to do. This could be it. This could be the book that makes types and what you can do with them makes sense to a lot of people.

That’s like first class functions in the first chapter, but in a very clear way. If you are into this stuff, you already know the calculus enough to follow along. I want to see something like that. He’s going to approach it at a very piecemeal as he usually does, just one small step at a time building up this dependent type system and what you can do with it. That’s going to be great.

Am I weird for not liking types that much?

I actually have met Dan Friedman at a couple of conferences. I spent a good two hours with him at one strange loop. I asked him about what he thought about types because I was thinking about types all the time myself. I had recently left my Haskell job. I was enjoying Clojure and just wondering, “Am I weird for not liking types that much?”

I found, for me, that was true and especially with the kinds of code that you can see him write in his work. He uses a very small subset of Scheme. It’s hardly a small language and he uses a small subset. He’s not doing higher order stuff you get in Haskell, where you need a type system because you’re doing something very abstract, like using type classes and stuff like that.

They can eliminate off by one errors. They can eliminate, you have a no terminated list, nil terminate list. You can tell whether you’ve got another element in the types. He said that that was the kind of mistake that he does find himself making, and so he was very interested in dependent types.

A few years later, here it is what The Little Typer. I’m very excited to see what he’s come up with and how to teach this, how to find the core of it. If you’re excited, let me know.

If you think that this doesn’t make any sense, also let me know. Are you going to buy the book, The Little Typer? Have you read any other little books? Get in touch with me. I’m @ericnormand on Twitter and you can also email me, eric@lispcast.com. I’ll see you later.