Alan Kay says there are only 2 Object Oriented languages that he knows of: Smalltalk and Lisp. The deeper I go into the history of Smalltalk, the more functional Smalltalk looks. 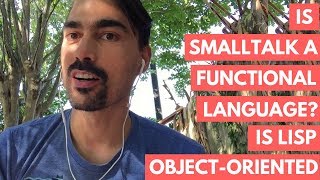 Is Smalltalk a Functional language? Is Lisp Object-Oriented?

The abstractions, the little data structures that people created are defined in a very recursive way. I think the paper…the early history in Smalltalk, there is a linked list that’s created that has a little object that has value and then a pointer to the rest of the list.

The method link is defined by adding one to the link of the next, the rest of the list. All the methods are short like that. It’s just some very simple, concise, code that defines this whole linked list. The whole interface of the linked list including the implementation is a note card with the code.

That what Alan Kay tries to emphasize is the stuff that is much more like what I’m calling functional programming. Which is kind of ironic. Alan Kay has said that there are only two object-oriented languages in the world — Smalltalk and Lisp.

Obviously, it is different, but is it that different that he would classify Lisp as object-oriented and almost no one else would? The fact that he has a lot of respect for Lisp as an idea…that he was inspired by Lisp to create Smalltalk.

I think that object-oriented programming and functional programming have a lot more in common than we like to think about. The modern practices of organizing these big classes with lots of immutable state and all that stuff that you would in a job of program.

I’m going to go and say it, I’m going to say it, Smalltalk is a functional language. If Lisp can be object-oriented then Smalltalk can be functional. That’s my short idea of the moment. I do think that the good practices in both of them converge.

If you’re going to make a small or recursive definition of something that should work in both paradigms.

I’d love to hear your thoughts on this. If you go to Twitter, I’m @ericnormand. You can also email me, eric@lispcast.com. That’s my email address. Love to hear from my listeners. Please let me know, if you disagree, if you agree, anything.

If you like it, if you don’t like it, let me know. All right. See you then. Bye.