People think recursion is hard but it’s no harder than a for loop. In fact, it’s got the same parts, they’re just not laid out in the same way. In this episode, we look at how you can spot those three parts in any recursive function. 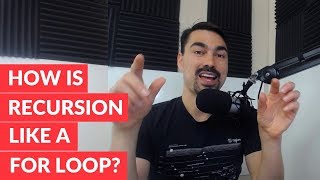 People think recursion is hard but it's no harder than a for loop. In fact, it's got the same parts, they're just not laid out in the same way. In this episode, we look at how you can spot those three parts in any recursive function. https://share.transistor.fm/s/5dd4e272 https://www.youtube.com/wat

Eric Normand: How is recursion like a for loop? By the end of this episode, you will learn the three parts to recursion — initialization, exit condition, and advancement.

Hi, my name is Eric Normand. I help people thrive with Functional Programming.

People often think that recursion is hard, but there really isn’t that much more to it than a for loop. It’s about as hard as a for loop. Let me put it that way.

Recursion is important because you’re going to come across it if you’re a functional programmer. People do recursive algorithms. Recursion, as I’ve talked about in a previous episode, is great for certain problems, better than a for loop.

Sometimes for loop is better, but recursion is better for some problems, particularly, if you have a recursive data structure. Let’s see how recursion is like a for loop, and how it should be straightforward to translate most things into recursion.

In the exit condition, you can do the opposite of that, i is not less than 10. There’s the advancement which is i++. It’s a very common pattern to use, the i=0, i is less than 10, i++, or i is less than the length of an array. That’s the for loop.

In recursion, in functional programming, we usually call the exit condition a base case. The base case is the case, usually it’s like the easy case. The empty list is the base case, and your advancement is getting you closer to the base case.

One of the differences between a for loop and recursion is that a for loop is a statement. It doesn’t have a return value. You have to get a value out or you’re building up a value in a variable somewhere.

A function call is an expression that has a return value, that has a value that when you evaluate it, you know the result of that expression. Your function call that’s recursive, your recursive function is going to have to figure out the value to return in each case.

That base case, the exit condition case, that one is you’ll have to figure it out. If it’s counting the elements of a list, the base case, the empty list, what’s the count of an empty list? Zero. What’s the other case? The non-exit case.

You have to think of the return value of that particular expression. You don’t do that in a for loop. In a for loop, you’re adding one to a variable.

Let me recap. Recursion means a function that calls itself, but it doesn’t give you a clue on how to solve problems with it.

For loops have three parts — initialization, exit condition, and advancement. Recursion has the same three parts. They’re just not all laid out in a nice little statement up at the top. In recursion, the exit condition is called the base case.

Whereas, recursive functions are called. They’re an expression. They need to return a value. You need to have a return for every case. This is one of the things that get people a little mixed up.

Do yourselves a favor. If you’ve got some recursive functions in your code base or code base you’re used to looking at, go through and identify the three parts.

The advancement is I either decrement to get to zero or I remove something to get closer to the end of the list. It’s interesting. You can start to play with it and do stuff that gets complicated in a for loop, although I still say for loops are great.

Please do me a favor. This is where I try to get you to help me out. Tell your friends about this. Recursion is an important concept. If I’ve explained it well, if you like my explanation, they might like it, too. Please subscribe because there’s more like this to come. You can also get all my old episodes. They’re all in there in the feed.

My email is eric@lispcast.com. I love to entertain questions. If you do email me about the podcast, I assume I can talk about it. If you don’t want me to talk about your question or mention you in the podcast, please let me know.

You can reach me on Twitter, love to get into discussions on Twitter. I’m @ericnormand with a D. You can find me on LinkedIn. Awesome. See you later.