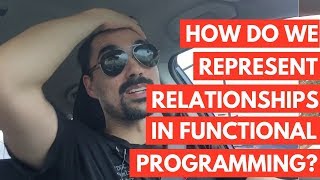 How do we represent relationships in functional programming?

The main problem with using a pointer is that it is unidirectional. Parent/child goes both ways. If I’m your parent, you’re my child. The child needs a pointer back to the parent to be able to maintain the relationship. You have two things. If they’re mutable, this is the problem. You have two things that you have to keep in sync.

In functional programming, what we tend to do is to reify the relationship into some data. It’s not like you couldn’t do this in object-oriented programming. I’m just saying that typically you don’t see this. What you do is you reify it into a piece of data.

Take a tuple, let’s say a two tuple, also known as a pair. You have a pair of pointers. It’s immutable, just to make it easier to reason about. The first element of the pair is the parent. The second is the child. Let’s say you’re not even using pointers. You’re using some other identifier that’s more stable, like the parent’s ID and the child’s ID.

You have this relationship and notice it’s got both ways. You can ask for who’s the parent and who’s the child. You can also do all sorts of other stuff with it, which is pretty cool, too. If you have a bunch of them, you can now consider this a relation in a relational algebra.

We’re not elevating the relationship to its own object. We’re talking about a person has a parent and a person might have children. You have these pointers and that’s it.

Let me give another example that shows the mindset difference. This is an example that I remember from school. I bet other people have had this in school, too. The assignment is to develop a class model for a student registration system. Students need to register for multiple classes, and those classes need to have a roster of the students enrolled.

If you say, “The students registers for the class.” The student has a register method you pass in the class. It sets its own pointer. Then it calls a method on the class. [laughs] The course, let’s call it. The course class. It tells it, “Now, put me on your roster.” You have this double message pass thing going.

Then that one will set the courses, will add to the course’s list of students. That way, you maintain the relationship. If you unenroll, you have to do the opposite. You have to remove it and then tell the course, “Remove me.” I remember doing this assignment and thinking, “This is very convoluted.”

At that point in my experience level, I felt like, “Well, this is just the way it’s gotta be. There’s going to be some convoluted stuff in programming.” When I started learning functional programming, what became very apparent was that this was just looking at the problem inside out.

For instance, if you were to look at how you would implement this in the real world without a computer, let’s say with just pen and paper, there would be no course you could talk to. There’s no course to send a message to. What there is is a book somewhere. Somebody in an office is sitting there with a book.

Now, I’m imagining how you could implement this. A student comes in and says, “I want to take English 101.” They come into the room. The secretary or whoever manages this book, flips the book open to the page for English 101, takes down your student ID, and that’s it. You’re in the course. You’re on the list.

Then maybe if you want to see your schedule, they could maintain a schedule for you where you give them a card. It’s not about the student having some power to send a message to a course. It’s about the data in this book. That is the canonical source of that relationship.

What we do in functional programming is instead of simulating a person and a course, we simulate the book. Maybe even enhance it. Now, we’ve got infinite space and what have you.

It would probably just be pointers in the same way. We’re still in the computer. We’re still dealing with pointers, but maintained in such a way that they are put together, like in a tuple. You can see that this is the course. This is the student. You could query the class.

The many-to-many class would have a method for give me all of the courses for the student, and give me all the students for this course. How do you represent a student in a course?

Here’s the thing. In that book, they don’t create a student. They don’t draw a picture of a student or something like that. They just take down your ID. That’s enough. That’s all you need. That will get you back to the student when you need to.

That’s what I would put in that many-to-many relationship. It’d be the student ID and the course ID. That’s all you need. You’re maintaining that relationship and you don’t have this convoluted system where you have to communicate between objects to maintain this double-sided relationship. [deep breath]

That to me is one big difference between a functional mindset and an objectorial mindset. We are trying to represent that as data and turn it into something that you can query, you can analyze, you can combine with…if you said, “Well, I want this.” Just think about it.

One big difference between a FP mindset and an OO mindset. We represent relationships as data and turn it into something that you can query, you can analyze, you can recombine.

You don’t want to have just one book because only one person…you have a long line when it’s time to register. You want different people to be able to register people. Then you deal with the problems later like if the class is too full, there’s three extra students because they weren’t coordinating.

Well, you can just look at the last ones and you say, “Hey. We’re sorry. You thought you were registered but you weren’t, right?” That’s just a way you have to deal with distributed systems, but you could make it so that you can have an operation for combining different many-to-many classes into one.

OK. Maintains relationships not with pointers meaning references to other objects that you have to…you’re obviously using pointers, right? Because it’s in the computer and that’s just how we do things with computers. It’s point to memory, but you are maintaining the relationship as a thing itself, not as an implicit effect of calling certain methods. Does that make sense?

OK. Please let me know what you think. This is one of those examples that when I realized what happened, what I was thought and how it doesn’t really correspond well with the real world.

It’s one of those examples that was really good for me to rethink and revisit my classes in college when I was thought this stuff and root out that idea that you want to have a class for everything and that you should maintain pointers as relationships.

This was really one of those example ones that I had to solve and I did caught a thing where I just iterated on it. I iterated on the problem in a functional way over and over until I rooted it out, all of that objectorial thinking.

Maybe you want to do that too. Maybe you want to see how you would implement this. Maybe naturally, like the way you are now and based on your training. Then also really go deep and try to get it as functional as possible.

All right. My name is Eric Normand. Please let me know on Twitter what you think. You can also email me at eric@lispcast.com. I would love to some reviews on iTunes if and on comments on YouTube, wherever. Just subscribe and you’ll be notified of new episodes. I’ll see you later.