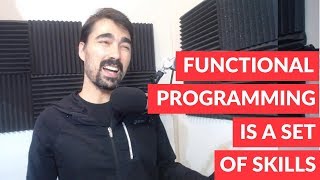 Functional programming is a set of skills

My name is Eric Normand and I help people thrive with functional programming.

A lot of people ask, “What is functional programming?” There’s a lot of answers out there. They’re somewhat contradictory. Sometimes they’re helpful, sometimes they’re not.

Just bypass that whole thing and look at it as just a set of skills. It’s basically the skills that functional programmers do more often than other people do.

Functional programming has different skills that you can mix and match and use them together with other paradigm skills. What are those skills? I’m going to go over five main skills right now.

Skill number one. I feel like this is an incontrovertible skill that you have to have to call yourself a functional programmer. This is non-negotiable. You have to be able to discriminate between actions, calculations, and data. I don’t care what you call them. I’m calling them those for a lot of reasons. I have episodes talking about why I chose those terms.

Actions, calculations, and data. You have to be able to look at your code and see, “Oh, that’s an action, that’s data, that’s calculations.” Calculations are computations from inputs to outputs. You might call them pure functions. This is pure calculations. Doesn’t matter when you run them. You’re going to get the same answer if you give it the same arguments.

Skill number two is to be able to work effectively with immutable values. We spend a lot of time in real-world information systems trying to keep records forever, or for as long as we can. We’ll put papers…we’ll file them away in a filing cabinet. We put some papers in a fireproof box. We use archival-quality paper and ink so that things don’t decay over time.

We have rules about who’s allowed to write on this paper. “Oh, no, this one is done. Don’t write on it anymore.” Maybe you stamp it and you say, “This has been checked and vetted. it cannot be changed anymore.”

There’s all sorts of real-world mechanisms for making things immutable, making our records permanent. When we’re building computer software, often we are making an information system, but because of the way memory works — and memory is mutable, memory can change — we have thrown that out. We have to rebuild the skill of working with immutable data.

A functional programmer has to learn how to deal with the immutable data. Basically, you’re making a lot of copies. That’s basically what it is. I have a whole episode just on working with immutable values.

One of the bigger challenges is working with nested data, because you want to change something deep in some nested structure. You have a company, has employees, and the employees have salaries, and you want to give everyone a 10% raise.

All right, let’s move on. Skill number three. This is another important skill. This is where the power of functional programming really starts to come out and shine. It’s using and creating higher-order calculations and actions.

You can do stuff like that if you’re operating at a higher-order level. You can do it without it, except you’re writing a bespoke program to retry three times every time. By having it be higher-order, you’re able to manipulate it in a regular way so that you can have this behavior that is typically just boilerplate, you can have it just define one place, and it works properly everywhere.

This is where the power comes from of functional programming, where we have stuff like map, filter, and reduce. Those are higher-order functions. They take functions, basically, letting you build data transformation pipelines.

This is where you get stuff like having sequences of actions that can retry, and what happens when they fail. You can define all of that compositionally instead of just a straight-up, top-down code.

This is very abstract stuff so it’s hard to explain. As I’m speaking, I can tell I’m not getting this stuff through very easily.

You don’t know what F is. It could be any mathematical function. That’s the kind of cool stuff that you can do in functional programming that’s hard to do without those first-class functions.

Let’s move on to skill number four, data modeling. We have these situations, these problems, these real-world processes that we are trying to automate. We’re trying to solve with software instead of physical process. How do we do that?

How do we take measurements and other facts about the world, about things that are happening, combine those together into concrete structures in our code, so that we can effectively use them? Data modeling is all about, how do you effectively structure the data that you have so you can use it effectively?

I have an episode all about the two kinds of data modeling that we do. There’s the data modeling where you’re having a public-facing data that needs to exit your library, exit your server. It’s part of the API. That data has different design constraints on it.

It needs to be human-readable. The developer on the other side is going to be writing that or writing a program to write that. They have to understand it pretty well.

Then there’s the data modeling that’s internal, where let’s say you’re doing some kind of search through a space. You need to represent the data in a certain way so that search is efficient and all the data you need is available, etc. That’s an internal data modeling.

You need some kind of design principles, some kind of architectural principles. Functional programming has those, has some, right? They’re a little bit different from what you find in other paradigms.

One architectural pattern that comes from the function programming world is the reactive data, reactive architecture. I don’t know if you’re familiar with Redux in the React world, or the Elm Architecture, or re-frame in ClojureScript. There’s many of these.

The idea is, events are being generated. You are consuming those events. That generates a view of the world, and that view is projected out, say, onto a GUI. You have some state somewhere that is being modified, some centralized state. You modify that.

Then, from that, it generates a projection onto a GUI. You have a cycle going on, and it’s all being done based on reactions, based on changes to the data. It’s an architectural pattern that you see in the React world quite a bit.

Separating the things out into this Onion Architecture helps separate things out into a fast-changing layer. That’s where all your actions go, your interaction layer, because you’re connecting to this API. There’s a version change for that API. Got to modify the code to talk to this API, that API. That’s changing very rapidly.

The business rules change rapidly, but not as rapidly as that. “Oh, the vacation policy changed. We’ve got to modify our code.” Then inside that domain model is the stuff that changes the least frequently. The fact that employees get vacation is a pretty timeless thing.

Even if something weird happens and employees start getting zero vacation, that is at least modelable inside the domain model, and you know it’s a weird case. “Right now, we’re not giving vacation. Right now, all of our salaries are at zero.” [laughs] It’s still a number. It still fits in the model.

All right, these are five skills that I am working on in my book. The book is called, “Grokking Simplicity.” You can get an early access version now. If you’re listening to this in my future, this is obviously my present, but in my future, it could be out. It could be finished. Get it. Buy the book. It’s published at Manning. Just google, “Grokking Simplicity.” You’ll find it.

Otherwise, I use this as a public forum. If you ask me a question, it’s going to be broadcast out. Just let me know, and I just won’t use it.

Cool, thank you so much. This has been my thought on functional programming. My name is Eric Normand. Thank you for listening, and rock on.